Jimin received his BS from Hanyang University, Seoul, Korea, and MS from Seoul National University, Seoul, Korea, both in Electrical Engineering. He then came to the United States and obtained his PhD in Electrical and Computer Engineering from Purdue University, West Lafayette, IN, in 2014. From 2014 to 2015, he was with the Center for Implantable Devices at Purdue University as a postdoctoral researcher. Jimin then moved to the University of Texas at Dallas to continue his postdoctoral research. From 2016 to 2018, he worked at the Advanced Polymer Research Lab and the Neural Interfaces Lab. Jimin joined the Ware Research Group in May 2018. His research interests include bioelectronics, neural interfaces, implantable/wearable devices, energy storage devices, and smart materials. 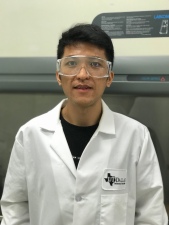 Cedric is a Bioengineering PhD student at UT Dallas, who hails from Cedar Hill, Texas. He completed his undergraduate work from Austin College in Sherman with a major in Physics and minor in Mathematics. Cedric joined the lab in the Fall of 2016 to pursue research in the Bioengineering field, specifically biomaterials and their applications.

Laura joined the Ware group in the Fall of 2017 as a Bioengineering PhD student. She graduated with a Bachelor’s degree in Biomedical Engineering from Universidad de los Andes, Colombia in 2016. Her current research project focuses on engineering living materials for biomedical applications.

Mustafa was born and raised in Jackson, MS and graduated from Tougaloo College with a degree in physics and a minor in mathematics in 2016. After college, Mustafa worked for Crestron Electronics as a verification engineer. Currently, he is pursuing my Ph.D. in Bioengineering. Mustafa’s research interests include engineering biomaterials for implantable devices and developing stretchable electronics. 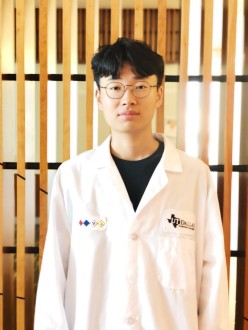 Suitu joined the Ware Group in the Fall of 2018 as a PhD student of Bioengineering. He received his BS in Polymer Science and Engineering from Sichuan University, China in 2018. His current research interests focus on synthesizing self-assembled chromonic liquid crystal polymers and exploring their biomedical applications.

Mahjabeen graduated from Lamar University in Beaumont, Texas with a major in Electrical Engineering and a minor in Mathematics in May 2018. She joined the Ware group in Fall 2018. Her research interest currently focuses on exploring and using biomaterials for implantable electronics.

Seelay joined the Ware group in August 2019 as a Biomedical Engineering PhD Student. She received her Bachelor of Science from Texas Christian University majoring in Mechanical Engineering with a minor in Mathematics in 2019. Her current research project aims to utilize liquid crystal elastomers to fabricate an implantable device that can treat Stress Urinary Incontinence in women. Seelay found her interest in biomedical engineering and medical devices through her industry experience working at Alcon for nine months as an intern and co-op. In her spare time, Seelay enjoys pottery and biking.

We also have a number of undergraduate researchers from a variety of majors at UTD.

Matthew Trisnadi – Graduated with his MS in Bioengineering in 2018.

One thought on “People”